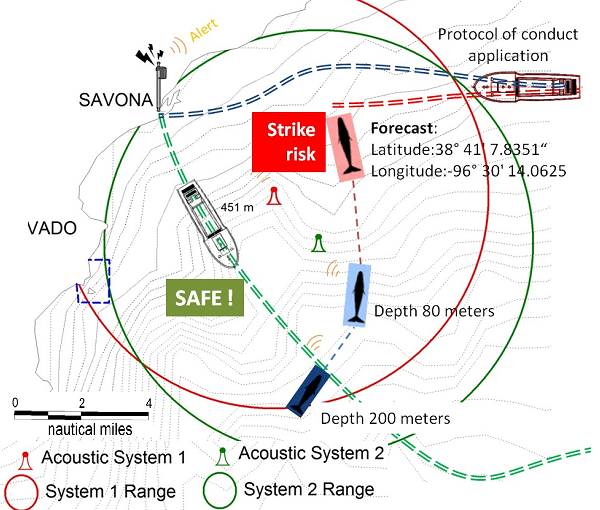 The project will improve the conservation status of the cetacean Sperm whale (Physeter macrocephalus), listed in the Annex IV of Habitat Directive as species in need of strict protection. The threat addressed is the marine traffic that can lead to collisions and noise pollution, representing disturbance of feeding activity and causing potential changes in sperm whale behaviour as well as injuries and, in the worst scenario, death of the animal.

The project will deploy an interference avoidance system capable to detect and track sperm whale, to identify the threats and to prevent collisions and other risks by issuing warning messages in real time to ships in the area. A Protocol of Conduct for reducing disturbance and strike risks will be developed and agreed by involved stakeholders in cooperation with the local Coast Guard branch. Upon reception of the warning messages the ships present in the area will be invited to follow the protocol of conduct and the Coast Guard will supervise its application.

This approach will ensure species protection improvement, sustainable coexistence of sperm whale and anthropic activities and will promote responsible usage of the sea.

The system is innovative as it prevents ship strikes by monitoring and tracking animals underwater, by acoustic means. This aspect is fundamental considering that sperm whales spend ¾ of their time underwater.

The area selected for the action is a representative “Case Study” as it is near the centre of Pelagos Cetaceans’ Sanctuary, one of the areas most frequented by cetaceans in the Mediterranean Sea.

The special seabed features in the area, rich in submarine canyons attracts a large number of sperm whales often emerging near to the coast. At the same time intense marine traffic interests the area due to the presence of a large commercial and passenger port (Savona) which determines disturbance and high collision risks for the animals.

The project will demonstrate the effectiveness of the proposed tool for reducing threats and improving preservation, as well as the possibility of easy replication in other areas. The tool is also conceived to operate after the end of the project with low maintenance costs.

A consolidated research group with a renowned academic and industrial profile.